‘We can’t relax’: Europeans face up to life after lockdown 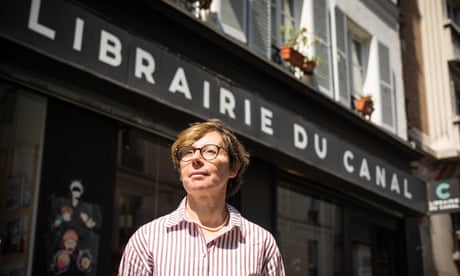 From Spain to Denmark, even those who have coped with coronavirus are aware the world has changed dramatically

Her customers may be back and there are, miraculously, more of them. Spring is here; the sun is out. No one wants to dwell on what happened; everyone wants to pick up their lives again, same as before.

Investors should brace for a 15%-20% downdraft due to escalating risks, BTIG's Julian Emanuel warns

Check out the companies making headlines after the bell.

Many on Wall Street grew worried that the rising risks of the racial strife and U.S.-China tensions will reverse the market's massive comeback.

Here's what happened to the stock market on Monday

Stocks closed higher to start the new month amid mounting bets on a successful economic reopening.

Tech deals plummeted during the height of the global pandemic. But that's likely to reverse in the coming months as big tech companies see opportunity, according to new analysis from Bain & Co.

A conversation about the latest market-moving news.

U.S. stock futures fall, with Wall Street set to give back some of May's strong gains

U.S. stock futures fell on Sunday night as Wall Street was set to kick off June trading on a sour note after consecutive monthly gains. 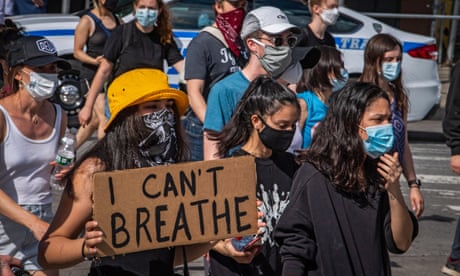 Global coronavirus infections have passed the 6 million mark as Latin America hit the grim milestone of 50,000 deaths with Brazil alone accounting for half of those fatalities.

With at least 369,000 deaths confirmed worldwide since the pandemic began in China in January – and that number believed to be an underestimate – Brazil’s virus death toll of 28,834 has now surpassed that of France with the country reporting 33,274 new infections reported in the past 24 hours. 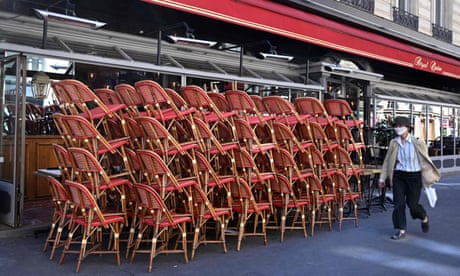 Temporary use of pavements or parking spots to be allowed for outdoor-only service, says mayor

Paris is gearing up for a battle for public space after the city’s mayor, Anne Hidalgo, said cafes, bars and restaurants would be temporarily allowed to set up tables on pavements and in parking spaces when they open this week.

Coronavirus lockdown measures are being eased further on Tuesday, with food and drink establishment opening across most of France for the first time since 14 March. However, because Paris remains “orange” on the country’s Covid-19 map, meaning the virus is still circulating, bar, cafe and restaurant owners have been told they can only serve customers outside on terraces and with strict physical distancing and protection measures in place.

Here's what happened to the stock market on Friday

Trump did not indicate the U.S. would pull out of the phase one trade agreement reached with China earlier this year, easing trader concerns for the time being.

The Paycheck Protection Program Flexibility Act, which passed in the House of Representatives on Thursday, eases loan forgiveness rules for small-business owners.

Expanded unemployment benefits could bump people from welfare, other assistance

Women losing jobs at a higher rater than men isn't just an inequality problem — it's an economic one too.

The coronavirus crisis has Americans hoarding more money than ever before.

A conversation about the latest market-moving news, including President Trump's news conference on China. 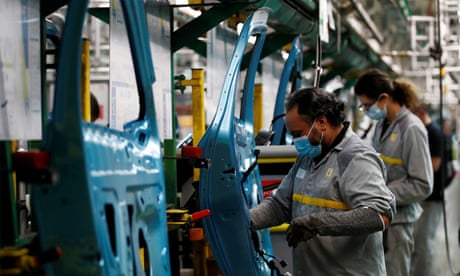 The French carmaker Renault plans to cut 14,600 jobs as it aims to save €2bn (£1.8bn), in one of the deepest restructuring programmes prompted by the coronavirus pandemic across the global car industry.

Renault will cut 4,600 jobs in its French operations, which will undergo a major reorganisation, and another 10,000 around the world.

'We are losers in this crisis': research finds lockdowns reinforcing gender inequality 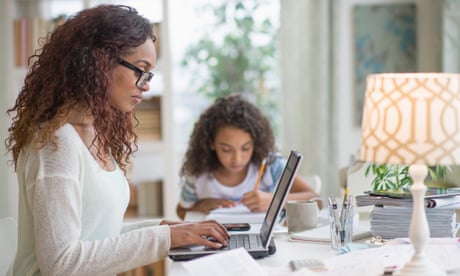 Life during the coronavirus lockdown has reinforced gender inequality across Europe with research emphasising that the economic and social consequences of the crisis are far greater for women and threaten to push them back into traditional roles in the home which they will struggle to shake off once it is over.

Throughout the continent, campaign groups are warning that the burdens of the home office and home schooling together with additional household duties and extra cooking, has been unequally carried by women and that improvements made in their lives by the growth in equality over the past decades are in danger of being rolled back by the health crisis. 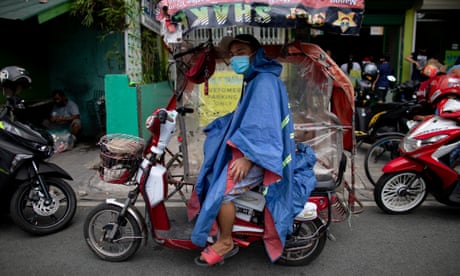 The Philippines president has announced plans to ease one of longest and toughest coronavirus lockdowns in the world despite the country seeing its biggest daily spike in cases since the pandemic began.

The Philippines reported 539 infections on Thursday, its highest daily tally, bringing its total to 15,588 cases, with 921 deaths. From Monday its capital, Manila, will allow gatherings of up to 10 people, free movement in and out of the city as long as people wear masks and keep their distance, and workplaces, shops and some public transport will reopen.

Cancer patients with Covid-19 treated with a drug combination promoted by Trump were three times more likely to die within 30 days than those who had either drug alone, US researchers said. “Treatment with hydroxychloroquine and azithromycin were strongly associated with increased risk of death,” said Dr Howard Burris, president of the American Society of Clinical Oncology(ASCO).

New York governor Andrew Cuomo said he would sign an executive order allowing businesses to deny entry to customers not wearing masks. He said: “That store owner has a right to protect himself … You don’t want to wear a mask, fine. But you don’t have a right to then go into that store.”

The president of Namibia, Hage Geingob, and several top officials have been fined after breaching regulations last month by hosting a celebration to mark his party’s 60th anniversary. The South West Africa People’s Organisation (Swapo) birthday party took place in parliament on 19 April, when Namibia was under lockdown and group gatherings were banned to limit the spread of coronavirus. All were fined N$2,000 (£92.34).

"We definitely think the market is getting pretty far ahead of itself," PNC Financial's Amanda Agati says.

Check out the companies making headlines after the bell.

Stock futures are flat ahead of Trump's U.S.-China news conference on Friday

Stock futures were flat night as traders braced for an upcoming news conference on U.S.-China relations from President Donald Trump.

Here's what happened to the market on Thursday

Stocks closed lower after President Donald Trump said he would hold a news conference regarding China on Friday. 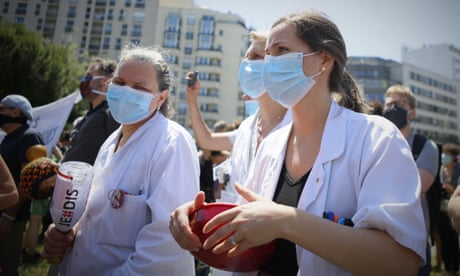 The French government announced a further loosening of coronavirus restrictions on Thursday, as officials in South Korea re-imposed strict lockdown measures in the Seoul area following the country’s biggest rise in infections in almost two months.

The announcements came as Donald Trump described the US’s 100,000 coronavirus deaths as a “very sad milestone”, and the World Health Organization said that a significant proportion of the 159,000 excess deaths recorded cross Europe since early March were linked to Covid-19.

The Philippines reported 17 more coronavirus deaths and 539 new infections, the biggest number of cases reported in a single day since the virus was first detected in the country. The health ministry said infections had risen to 15,588 and 921 people had died.

Official figures from Denmark suggested that sending children back to school and daycare centres has not led to an increase in Covid-19 infections. Following a one-month lockdown, Denmark allowed children between two to 12 years back in day cares and schools on 15 April. Health authorities said five weeks’ worth of data had shown there had been no “negative effects from the reopening of schools”.

Take a look at the companies making headlines in midday trading. 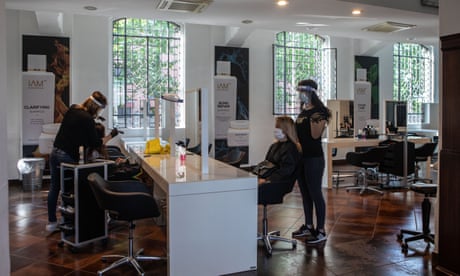 Several European countries a few weeks ahead of the UK on the road out of lockdown have experienced local spikes in coronavirus infections, but all have maintained an overall downward trend in new daily cases of the virus.

Most governments, though, continue to warn of the real threat of a second wave of Covid-19 cases and to insist on the importance of physical distancing if the spread of the virus is not to pick up again as restrictions easer.

Epidemics of infectious diseases behave in different ways but the 1918 influenza pandemic that killed more than 50 million people is regarded as a key example of a pandemic that occurred in multiple waves, with the latter more severe than the first. It has been replicated – albeit more mildly – in subsequent flu pandemics.

Expanded unemployment benefits offered through the Pandemic Unemployment Assistance program are reaching nearly 8 million Americans, about 25% of all recipients.

Column: What COVID-19 is teaching us about how to reform Medicare

The COVID-19 pandemic has put a bright spotlight on weaknesses in many of the systems designed to protect Americans from risks. But with older people more susceptible to serious illness and death...